I have recruited for more than eight years in the UK and Australia and unfortunately, in that time, one of my candidates took his own life.

This happened around five years ago in the UK, yet it still plays on my mind to this day.

About two months ago, I was speaking to a client (in Australia) and the candidate mentioned came up in the conversation. The client was telling me his funny stories about the candidate and said he was an old mate who he had unfortunately lost touch with. He then said ‘I must drop him a line to see how he was getting on.’

Unfortunately, I had to share the terrible news to the client and despite it being a phone conversation it was clear it hit him hard.

I’m sorry to bring up a dark subject, but the problem is within our industry we don’t bring it up enough. Stereotypically, we think it’s not the done thing to speak about our emotions or talk about matters close to the heart.

Well, I think given the statistics and the reality of the situation, it’s time for our industry to sit up and make this a matter of priority.

Sadly, the numbers of those within the construction industry taking their lives is on the increase. We all have a responsibility not only as employers, employees and contractors, but as members of society. 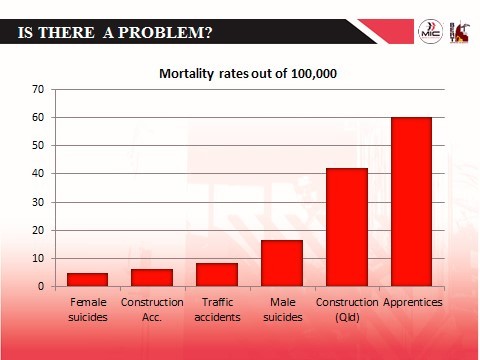 Table courtesy of MATES in Construction

According to a recent PwC report on mental health in the workplace over the past 12 months, 25.1 per cent of workers in the construction industry reported a mental health condition.

Furthermore, 8.9 per cent of construction workers reported a condition affecting their mood, such as depression, which is considered one of the risks for suicide.

It is based on the simple idea that ‘suicide is everyone’s business’ and that if the building and construction industry in Australia is to improve the mental health and wellbeing of workers and to reduce suicide then it cannot be left to the mental health professionals, but rather everyone in the industry must play their part.

Tomorrow take the time to speak with people on site as it can be the small and seemly insignificant conversations that mean the most to people.

If everyone just had one extra conversation on site this would have a massive impact on the mentality that it is ok to talk about your feelings.

Construction employers, workers and their families can contact the MATES in Construction hotline 24 hours a day, seven days a week on 1300 642 111.  Other great links include www.headsup.org.au and www.beyondblue.org.au.

Remember, it’s everyone’s responsibility to reach out and help their mates.

David McIntyre is a Senior Consultant in Davidson Trades

* Davidson Trades is no longer part of the Davidson Group. For more information please contact the Davidson Projects & Operations team.

almost 6 years ago by Sarah Morgan